Eleftherios Venizelos Airport is the airport in the Greek capital city of Athens. The airport, which was inaugurated on 28.03.2001, was named after the Cretan politician and former Greek minister president Eleftherios Venizelos (* 1864 in Chania, † 1936 in Paris). Eleftherios-Venizelos-Airport merges all domestic and international flights and replaces the two terminals (national/international) of the old airport Athens-Hellinikon. Situated in the Borough of Spata, the airport is about 27 km north-east of Athen’s inner city. [More]

The construction of Athens International Airport - Eleftherios Venizelos was the biggest infrastructural project based on private funding ever in modern Greek history. On the
31.07.1995, the Greek government and a private consortium led by HOCHTIEF (plc) concluded the Airport Development Agreement (ADA) with the common goal of developing a new airport in Spata. Athens International Airport S.A. (Diethnis Aerolimenas Athinon A.E.) will be legally run as a private corporation for the duration of 30 years including the construction period in the form of a public private partnership (PPP). The Greek state owns 55% and the other private partners the remaining 45%.

Athens Airport is accessible from the south via the six lane motorway Attiki Odos (subject to a charge), linked via the Eleusina to the Airport by several exits. The southerly suburbs of the capital (e.g.. Ilisia, Zografou, Vyronas, Kesariani, Papagou, Holargos, Ag. Paraskevi) are linked to the airport by the ring road Ymitos, here there is also a choice of several exits. Free access to the airport is available via the Lavriou Avenue and other primary roads. Coming from the southerly suburbs or Piraeus, costs can be avoided by using the Possidonos Avenue or Vouliagmenis Avenue, Varis-Koropoiou Avenue and finally accessing the airport via the Attiki Odos motorway. The short-term car parks P1 and P2, with a total of 1360 parking spaces are to be found directly in front of the arrivals hall of the main terminal. Long-term parking is possible in Zone P3 by the Attiki Odos motorway, with a total of 3378 parking spaces. Athens and Piraeus harbour may be reached using the metro, train or the airport buses. Three bus services run by the Express Airport buses and six bus lines operated by local transport serve the airport exclusively. The metro line 3 runs from Athens International Airport to the end of the line at Monastiraki, where it is possible to change to Line1 from Piraeus to Kifisia. The journey to Syntagma takes 27 minutes and 60 minutes to Piraeus. Athens International Airport (AIA) is also linked via the underground to Larissius station (Athens Central Railway Station), and from here there is a connection to the metro line 2, as well as with Korinthos.

Yes, paid parking for about 4400 vehicles

Most popular destinations from Athens

Most popular departures to Athens 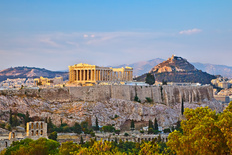