The major airport in Bangkok Suvarnabhumi International is one of the largest airports in the world and is an important hub for global scheduled air traffic. Bangkok, the largest metropolitan area and the capital of Thailand is also the main transport hub of the country. Besides the international airport it also has another airport, the Bangkok-Don Mueang,which since 2006 has only been used for domestic flights, and is still used by certain airlines such as NOK Air or the One-Two-Go Airlines. Don Mueang is located about 25 km or 15 miles north of downtown, right on the Don Muenag Toll Way (national road 31) or about 38 km (23 miles) northwest of Suvarnabhumi. [More]

The modern infrastructure of the airport terminal currently has 360 check-in desks to be found in a building measuring approximately 444 m length by 111 m in width. Thus Bangkok Suvarnabhumi, after Beijing and Hong Kong-International Chek Lap Kok, has the third largest single-handling terminal in the world. An additional feature is the 132.2 m high control tower that is currently the largest of its kind. The two parallel runways used for take- off and landing, which are 4000 and 370

Most popular destinations from Bangkok

Most popular departures to Bangkok 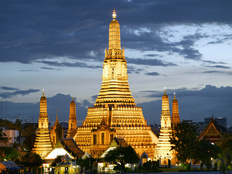