Euro Airport Basel-Mulhouse-Freiburg is an international airport and company based in France. An agreement in 1949 gives the airport its international status, which is unusual for an airport. The airport is located entirely on French territory and has a Swiss customs sector, which is connected via a toll road to Basel. [More]

Behind Zurich and Geneva, this is Switzerland's third largest airport and one of the five largest regional airports on the French side. In 2004, the airport was able to count approximately 2549 million passengers. Since 2005, passenger numbers have increased disproportionately as the British low-cost carrier easyJet has been based at the airport with a selection of destinations. In 2005, more than 3315 million passengers used the airport. In 2006, the airport counted more than 4 million passengers, the highest since it was opened, and was thereby able to beat the figure from 2001 (about 3.55 million).

When looking for a flights from the Euro Airport, both destinations should be searched for, a fact which many travel agents are not aware of, a flight Mulhouse - Paris CDG operated by Air France may be cheaper than Basel - Paris CDG by Swiss and vice versa. A ticket "BSL-CDG“ may well be issued with the transfer MLH. The section BSL to MLH is travelled by foot. In contrast to most other airports, on arrival the baggage reclaim area comes before passport control. Only after having picked up the luggage, do passengers pass through the Swiss or French border controls.

6 km or 4 miles north west of Basel; access via Zollfreistrasse; highway A35 / A3.

Most popular destinations from Basel

Most popular departures to Basel 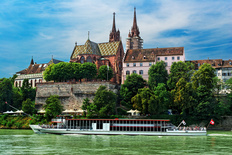