The new airport Berlin Brandenburg was officially opened on 31st October 2020. The airport uses the IATA-Code BER, which prior to the new airport's completion was used to designate all Berlin airports (most recently these included Tegel and Schönefeld). [More]

Germany‘s capital, Berlin, now only has one international airport to be used for all flights operating in the region of Berlin and Brandenburg.
Due to its location in central Europe, all important European destinations as well as the large airports in eastern Europe are within easy reach of Berlin Brandenburg Airport. There are plans to expand further to also include lucrative intercontinental routes.

Berlin Brandenburg is expected to become Germany's third largest airport after Frankfurt and Munich, as well as being an important hub for German and international airlines.

Berlin Brandenburg International Airport is the most modern airport on the European continent, it carries the name of Willy Brandt, the former Chancellor of the German Federal Republic and also former mayor of Berlin.

Flughafen Tegel (TXL) in the northwest of the capital has been replaced by the new airport and, after its closure on 7.11.2010, will only be used to operate any flights if the need occurs for 6 months after this date. After this, housing projects as well as other developments will be constructed on the airport grounds.

The former airport Berlin-Schönefeld (SXF) is now integrated into Berlin Brandenburg airport and will from now on be Terminal 5.

Airport road off the A113 highway or the B-96a (both with airport exits).

Most popular destinations from Berlin

Most popular departures to Berlin 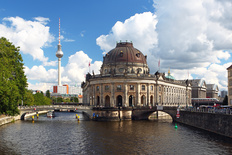