Dubai Airport is the seat and hub of Emirates, Dubais international airline. It is a about 5 km south-east of the city. [More]

With a total of 24.7 million passengers and 217.165 flight operations, Dubai airport is the most significant airport in the Middle East. As far as the volume of cargo is concerned, with 1.300.000 tonnes it takes up place 18 worldwide. Now more than 100 airlines fly to over 150 destinations. Dubai may in the future possibly replace London, Paris and Frankfurt airports as the hub for cargo transport between America and Asia.

Since 2002, three further terminals are being constructed in addition to the Sheikh-Rashid-Terminal opened in 2000, meaning that at the beginning of 2007 the airport will have a capacity for over 70 million passengers per year. At a distance of only 40 km the largest airport of the world is currently under construction: Dubai World Central International Airport. Despite its size it is not intended to replace, but merely to complement, Dubai International Airport.

Most popular destinations from Dubai

Most popular departures to Dubai 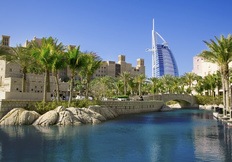