Istanbul Sabiha Gökçen Airport, named after the first Turkish pilot, an adoptive child of the state's founder Mustafa Kemal Atatürk is one of Turkey’s main airports. It is located in the easternmost district of Pendik, which is only about 10 miles from the neighbouring town of Gebze. The smaller of the airports in Istanbul is primarily served by the so-called low-cost carriers and some charter airlines from Europe and the Middle East, because due to the greater distance to the city, the fees are lower. The much larger Istanbul-Atatürk is more important for scheduled airlines and is 40 miles further west in the European Bakirköy district.

The airport is located near the O-4/E-80, from Istanbul to Gebze. 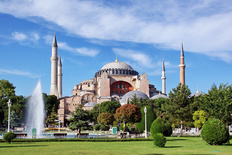