The airport is 15 miles from the center of London in the London Borough of Hillingdon, inside the M25 motorway ring. It is the seat of British Airways and Virgin Atlantic Airways. On an area of 1600 ha and with a total of 67 million passengers, Heathrow has the greatest number of passengers in Europe ahead of Paris Airport Charles de Gaulle. It comes after Atlanta and Chicago as the third largest airport worldwide. Heathrow also has the largest international passenger number of all airports. In 1987, the British government privatized the airport operator British Airports Authority (now called BAA plc). Along with Heathrow, the other six UK airports (Gatwick, Stansted, Southampton, Glasgow, Aberdeen and Edinburgh) now also belong to BAA.

Most popular destinations from London Heathrow

Most popular departures to London Heathrow 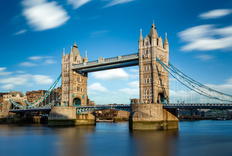