Madrid-Barajas Airport is the largest and most important airport in the south western European kingdom of Spain. Currently counting more than 50 million passengers a year, the airport is heavily used and is the fourth-largest airport in Europe, after London-Heathrow, Paris CDG and Frankfurt / Main. Madrid is also the most important hub for non-stop scheduled flights to the South American continent as well as being the hub of several Spanish air carriers such as Iberia and Spanair.

Most popular destinations from Madrid

Most popular departures to Madrid 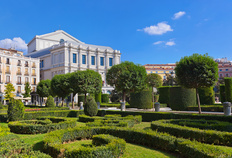