From Botany Bay, the airport is easily accessible by car. There are also several bus routes at the airport but advanced booking is necessary. An underground train service to the airport is operated by the Airport Line and the so-called AirportLink also links Sydney airport with the city. As the terminals are separate from one another there is a terminal transfer available at a cost which takes passengers from the international terminal to one of the others. Besides the trains of the airport link, there is also a T-Bus Shuttle Service. By train, the airport is reached via the terminal stations. From here the city ring road or Sydney Central Station is accessible. The station provides services to every destination in the vicinity.

In 2005, a 20 year phase of development began, involving various conversions and extensions. However, several of these plans were reduced in 2006.

Most popular destinations from Sydney

Most popular departures to Sydney 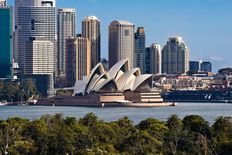